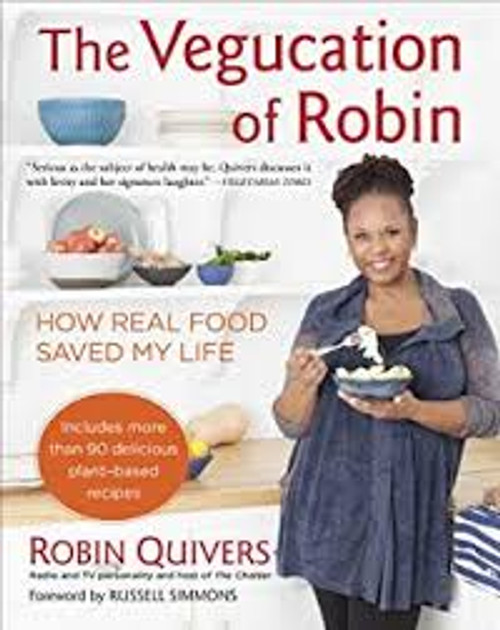 Beloved for her big sense of humor and even bigger laugh, radio superstar Robin Quivers rocked the entertainment world in 2013 when she revealed that she was recovering from an aggressive form of cancer - and that she credited her plant based diet with making her body a healthy and resilient enough to survive against the odds. Now, she shares the secrets behind her victory over the high-fat, high sugar, high cholesterol, highly additive foods that almost put her into an early grave.

On her sometimes rocky - but always endearingly funny - path to newfound health, Robin filled up on soul-filling, cell-nourishing vegetables instead of damaging animal products and processed foods. Charting her inspiring road to wellness, The Vegucation of Robinis both Robin's manifesto and your own road map to health, including:

With her signature humor and wit, Quivers proves that the key to having the life you've always wanted lies not with your doctor but in your kitchen. Putting a new face on the pro-veggie movement, The Vegucation of Robinwill dazzle readers who want to look good, feel good, and have fun doing it.

My Name Is Truth: The Life of Sojourner Truth

MY INFAMOUS LIFE: THE AUTOBIOGRAPHY OF MOBB DEEP'S PRODIGY

FOOD FOR LIFE: DELICIOUS & HEALTHY COMFORT FOOD FROM MY TABLE TO YOURS!

UNCENSORED: MY LIFE AND UNCOMFORTABLE CONVERSATIONS AT THE INTERSECTION OF BLACK AND WHITE AMERICA

THE SEASONED LIFE: FOOD, FAMILY, FAITH, AND THE JOY OF EATING WELL

The Laws of Human Nature